Since two year now some china based counterfeit operation is flooding the market with professionally printed counterfeits. They are using multiple large china deal websites and identities to stuff their products intp the market. These individuals sell them as “proxies” but in fact they are just fakes. From seeing shops go up and down we know WOTC is actually taking action against these individuals. Even if they are not communicating anything about it (which perfectly fine). The current counterfeits seem to be produced by a company producing normal poker cards and gaming stuff. As far as I know the real source is known to WOTC and was shut down once before, reopening their business shortly after that under a new name.

These Asian fakes are categorized by their vendors in so called “gens” oder “generations”, being 5th the latest as I am writing this article. The quality of the print is workshop quality but the pre-press work done is lower end quality. Some of the cards might look good in sleeves but will fail a check by an educated person who is aware of counterfeits like you now.

There are also something described as “white core” printing, which is some sort of “on demand” printing on cardboard. These cards are nowhere close to real magic cards and can be identified by anyone who seen the original version in seconds.

The quality of the higher quality printed “blue core” cards is not visibly developing between the generations. Some of the newer cards from china are even worse than old ones. Badly cut cards are as common as heavy print and color mistakes. They are called “black core” due to the paper used to make them which has a black inner layer, instead of a blue one. More on this topic can be read in the rip test article about this.

How to spot Chinese Counterfeits

One strong indicator for a card being a Chinese counterfeit is the gloss, they have a heavy glossy finish which gives them a different feel to real magic cards. This finish is usually added in the printing process to protect the colors over a longer term. But don’t get confused, there are actually some cards from commander products which have a similar finish. This happened as the commander products were printed with different companies other than Cartamundi.

If you have a fine scale, check the weight. The Chinese fakes are always more heavy than normal cards. Also check the backs as the quality of their backs is the best indicator. the Magic logo ist a bit blurry and they are surprisingly low quality. A last indicator, which is mostly present in the latest versions of the cards is the yellowish tint, it seems the printing and sheet checking is done under a wrong lightning giving the cards a slight yellow touch. See the picture below for a comparison, that is not a variation present on real cards. 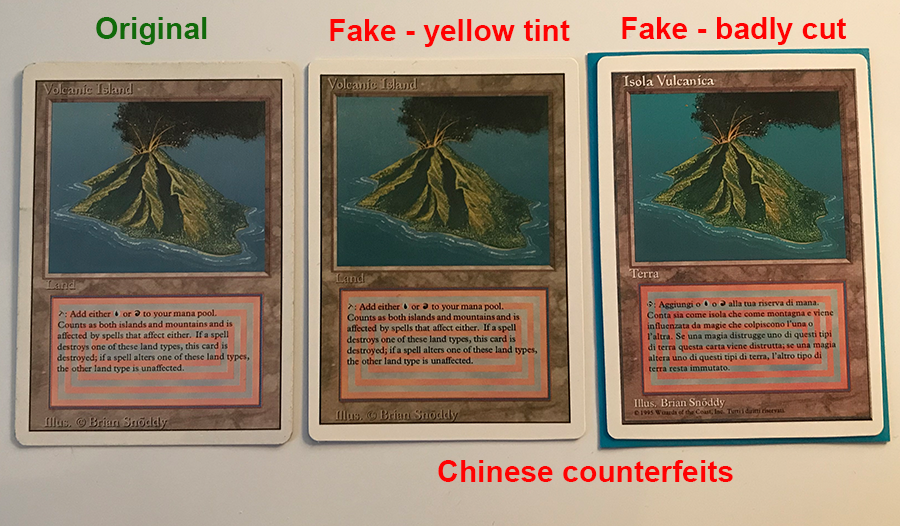 Chinese counterfeits are sold as “lists”, in pre-packed packs of 54 cards including a list of foreign ones (yes, these aren’t save either). Singles are sold as well, from the stock of the vendors. If you know the list they have is always a good idea, to check cards you get against it and cards present on it twice. The lists are not limited to high value cards. Most of the cards are even surprisingly cheap. 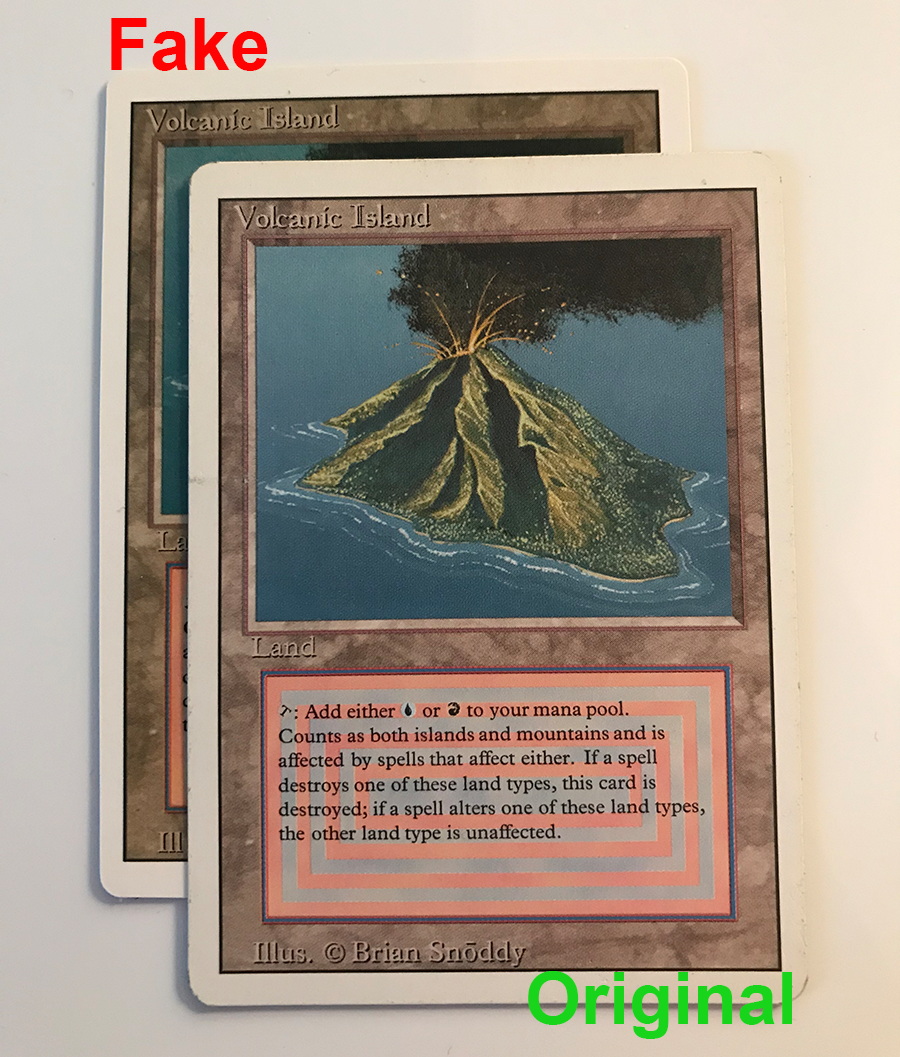